The Let’s Play Project would like to say a huge thank you to all of the Lloyds TSB commercial finance team for creating a sensory garden as part of their annual “Give & Gain Day” for members of St. Mary’s School and the young people who access the Let’s Play Project. The garden has been a great success and has been enjoyed by many of the young people who access after school clubs at Let’s Play. 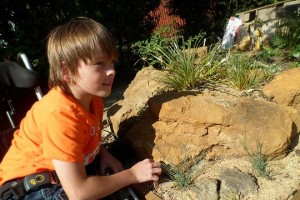 – The Project Team including Hayley Davies, Sarah Nunn, Rachel Bates, Janine Boyd and Angela Griffiths
– John Tolmie of St. Mary’s School who assisted the Lloyds team and have helped to maintain the garden along with Debbie Townsend and members of the gardening club.
– Kris Winters and Mick Paris (Sales Dept) of Nicholls Building & Plumbing Merchants, Banbury.
– Stuart Griffiths – Paragon Tool Hire , Buckingham.
– Managers Andy & Chris of Hilliers Garden Centre
– Sarnies of Banbury who made the bacon rolls for the bacon butty sale which enabled the team from Lloyds to buy the materials needed along with funds raised from a raffle sale and supplying prizes and plants.
– To all of the friends and families who came along and spared their time to assist with the all the hard work that went into making the garden.
– To the staff who kept departments running at Lloyds TSB to enable the Sensory Garden to be built.

View all posts by Tracey Owen →

This function has been disabled for Let's Play Project.